- Text Size +
Author's Chapter Notes:
RICHONNE LEMON SHOT
Alternate Universe:Ricks Been A Very Naughty Cop... Quote: ***'Don't tie me down, handcuff me to your heart and I'll do a life sentence.'*** 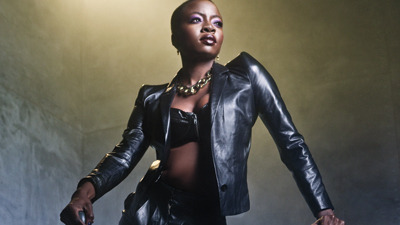 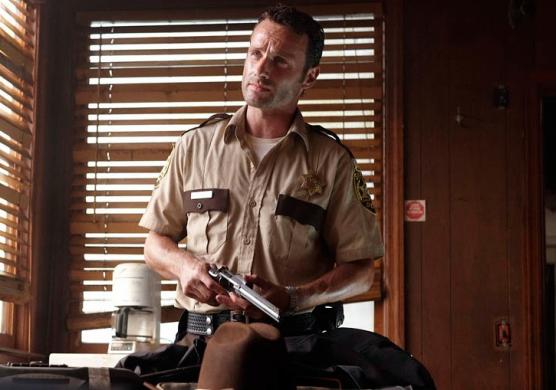 Rick slowly entered his dimly lit house. He could smell the faint aroma of his missed dinner as he swiftly passed his kitchen and continued to make his way towards his bedroom. He tiptoed as he entered the darkness of the room, using his familiarity of the area to guide him in the pitch-blackness. He was over two hours late for a planned romantic evening with his wife Michonne. Instead, he got dispatched to Smugglers Bar and Grill to handle a domestic disturbance call.

He and his deputy Morgan Jones made a few public intoxication and disorderly conduct arrest as well. The Sheriff of Kings County Georgia was so busy with processing the detainees; before he knew it, it was 10 PM and he was in big trouble.

She'd told him before, if something like that happened, the least he could do was call. She didn't want to worry about her beau.

He understood why she worried so much. His job is risky. Michonne, being a savvy lawyer, knew first-hand how dangerous and ruthless criminals are.

She cherished every single moment they had.

Rick, determined to keep his marriage to the woman of his dreams strong and healthy, no matter what bullshit the world might throw at them.

The thought made him physically cringe as he imagined how upset his sweet wife must have been before she went to bed.

Quickly he undressed down to his boxers, making sure not to make a sound as he placed his weapon down on the nightstand. He lay down to the comfort of his bed, squeezing his eyes shut tight, willing away the anxiety and welcoming the exhaustion to take over. Rick snapped awake to the familiar click, zzztttt, sound of handcuffs. His arms stretched above his head, he is bound by his own handcuffs, locked around the wooden bedpost.

"Michonne…"  he rasped, alarmed with eyes as wide as saucers, he helplessly calls out in the darkness.

"Yes, baby." Michonne calmly answers back. He assumes by the sound of her voice she is over by the vanity across the room.

"Baby, what's goin on?" The lamp on the vanity clicked on giving the room a dimly lit glow.

"I handcuffed you," she helpfully informs him.

'Goddamn', he mouthed between gritted teeth.

Michonne knows what thigh high stockings do to him. His eyes sparked hotly with lust. His wife is so beautiful, it was ridiculous, the way she turns him on. Michonne loved that after three years of marriage Rick still hungered for her, just the same as when they first met.  He pulled at his cuffs, painfully the cuffs tightened.

"Are ya, gonna tell me why you handcuffed me?" Refusing to blink, he drilled her with a sarcastic stare.

"You're smart Rick; you'll figure it out soon enough." Challenge sparked hotly in her eyes. "For now, you should try not to struggle too much and figure out a way to convince me to release you."

Rick's forehead crinkled with confusion. His confusion is lost to lust when Michonne begins to slowly and ever so gracefully saunter across the room towards him. Big cerulean eyes boldly meeting those soft brown eyes in a fiery gaze. She's so close he can almost count her eyelashes even in the shadowy dim light. She leans in and softly kisses his lips.

He wanted to turn his head in protest. But he could never be resisting to Michonne showing him affection, even if she was doing so in such a bizarre way. She realized his lips had not puckered to meet hers so she deepened her kiss. Rolling the soft wetness on her tongue and making his entire body jerk and twitch with need. A clipped gasp escaped his lips before he could wrench it in. He relented and fairly devours her mouth as the tent in his boxers becomes more and more noticeable. She broke their kiss, needing to catch her breath.

She gazed at his raging hard-on and smirked.She tugged at his black boxers and threw them, barely missing their cat Hershel. Freeing his red-hot member she gently tugged it, initiating a guttural moan. He hissed loudly when she took his length into her mouth.

His head pressed back into his pillow. It had been a while since Michonne had gone down on him. She was so good at it; he wanted her to do it all the time. But Rick was a gentleman, he never asked. He always wanted her to want to do it.Now his entire world narrowed down to the delicious sensations between his legs. Now he was unable to think about it. How she moved, how she sounded, how she touched him in ways that had made him lose his mind. Then she does something with her hands and tongue that makes his body seize and his eyes fly wide open and he can't even find the air to gasp at the immense pleasure. He wants so badly to touch her, to please her the way she's so effectively pleasing him.

And then she stopped. His lower lip stiffened, but he refused to let it tremble. He realized now that his sweet baby was going to make him suffer. He pictured his balls being obscure blue by morning.

She smirked, knowing that Rick has figured out what she was planning to do. "Before the night is over, you will be begging me to give you release." She wagged her finger at him, then backed away from the bed a few feet so Rick could get a good view of her. Achingly slow, deliberately she undressed, first the camisole, next to the panties and garter belt, she kept on her lace thigh high stocking. She sauntered closer to Rick.

He inhaled desperately wanting to smell her sex, he could see it glossing with wetness. Michonne's breathtaking naked body had burned itself into his brain. His eyes were greedier, fuller of lust than any man she'd been with. Heavily lidded, glazed and sapphire, there was no doubt he wanted her as much, if not more than she wanted him.

"You know what I would do if I wasn't handcuffed to this goddamn bed." He growled deep in his throat, purring to her, trying to communicate how fucking deliriously happy she made him. How fucking insane she drove him.

"I know..." His harsh honesty made her body scream with longing. She languidly climbed up his body, sliding her hands on his belly, his chest and ruffling his dark curly locks with her fingers. She gently straddled his face. Her legs open wide. Her sweet, wet, bald pussy landed softly on his lips.

She moaned at the feeling of his lips. Rick peppered her clit with soft kisses. He needed more. So he licked her sweet chocolate-colored clit hot and intently, sucking the tender bud in-between his lips, while the tip of his tongue rhythmically darted in and out of her honey pot.

She looked down then, catching him with his eyes closed, just drinking her in. Continuing to flutter throughout her body, from chest to toe and he drew his skillful tongue in and out, not stopping it until he had milked every last drop. It was the most erotic thing she'd ever witnessed. It washed over her suddenly and hard. Breathlessly, battling between clamping her thighs together to quell his teasing, her eyes fluttering closed at the sensation. She was clenching, coming, slick wetness pulsing down her thighs and over, into Rick's mouth. She screamed, her orgasm increasing tenfold. She slumped over him, her hands propped against the bedpost while she caught her breath. Unconsciously, Rick sucking his lips along with the evidence of what he'd just done into his mouth.

Shuddering, she slowly slid down his body. She reached between them and gently drew his raging hard cock two inches inside her. Instinct took him hard and he thrust his hips, trying desperately to bury himself to the hilt. Immediately, grunting loudly as she lifted up. Her sex just inches away from his painful erection.

Rick's eyes widened in disbelief at the sudden abandonment, "Michonne, please..." He begged, his voice trembling with desperate need.

The look in his eyes was heartbreaking. She wanted to torture him more, but he needs her so badly and she wanted him just as bad. So she relented. Michonne takes his massive dick deep inside her womb and hums around him. He hisses and thrust furiously into her and watches as she takes up a sinewy rhythm. His hands are balled into tight fists as his hips buck frantically and all he can do is lay there and feel. His shaft frisked along the top of her core, right along the nerve endings that led to her clit. She threw her head back and palmed his chest to brace for her impending climax. She sobbed at the incredible stimulation his cocked offered.

"Come for me, dammit. Right now," Rick hissed at her and thrust up and she slammed down harder on his hips. His southern drawl sent chills of pleasure down her spine. Her womb clenched and pulsated as she came with passion.

"Aaah..!" Tossing his head, his mind going white as he comes hard, grunting as he pulses hot fluid deep inside of her eager body…He groaned at the feeling of her orgasm, clutching deliciously around his member. "I love you so much Michonne." He gasped softly.

Years of loneliness had evaporated the moment she came into his life.

He whispered softly, still catching his breath, "I promise to call the next time I'm runnin late ."

Michonne rolled her body off him, still panting heavily.

"You better." She fluffed her pillow and pulled the sheets over her body.

"Will you un-cuff me now." Rick was certain Michonne must have forgotten, "These things hurt like hell." He winced in pain as the cold metal dug deeper into his skin.

Michonne rested her head on her pillow, facing away from Rick. She was hiding the hilarious grin on her face and desperately suppressing a giggle...

She loved him with all her heart, but tonight, she would make him wait for her. This was payback for making her wait for him without a call for the past three weeks in a row.