- Text Size +
Author's Chapter Notes:
Being married to the president of the free world is a journey filled with uncertainty; can Fitz and Olivia survive the storms ahead. Will love concur all? Fitz and Olivia's journey if he was already divorced when he began his campaign for the presidency. (Olivia Pope and President Fitzgerald Grant on the ABC show Scandal

"My love for you is a journey starting at forever and ending at never." Song: That's Where It's At" By Sam Cooke... 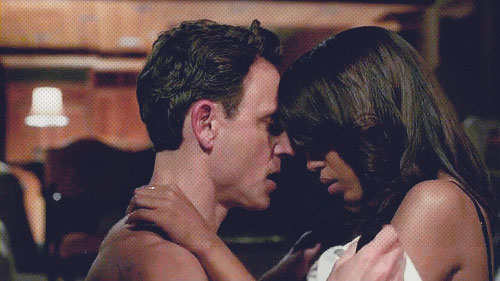 She stood in front of their bedroom window staring at the snow-covered landscape that cold January morning. It was approaching midnight when Fitz arrived home.

The door opened behind her and she half turned. Fitz stood in the doorway, light from the hallway silhouetting his frame and she was in awe of his handsomeness. He reached her in a few strides and pressed his body against hers, gliding his hands around her waist. She sighed and leaned back against him. He nuzzled her neck and she tilted her head to give him better access.

"I missed you Liv." His voice rumbled low in her ear, sending involuntary shivers down her spine.

"I missed you too Fitz." She replied turning into the circle in his arms she slid her hands up his chest.

His whole face perked up and he pulled her even closer, kissing her tenderly before trailing his lips over her cheeks and brow then down to her ear.

She brushed her hips against him already feeling the evidence of his arousal.

With a growl, Fitz began running anxious hands up and down her back. Oliva, reciprocated, pulling his shirt free and working her hands beneath the material. His skin was smooth and warm against her palms, the muscles shifting smoothly. Eager to feel flesh against flesh her hands slid around his waist to his belt, fumbling with the clasp. Once it was free, she undid the button. Slid down his zipper and worked her hand inside.

Fitz shaft was hot and firm against her hand and she stroked him. His hips involuntarily flexed in response while his fingers dug into her upper arms. Capturing her mouth with his, Fitz kissed her deeply, his tongue plundering her mouth, mimicking the actions with his lower body. It seemed to go on forever until the need for oxygen had them pulling apart, both flushed and breathing heavily. With frantic hands, they quickly disrobed and Fitz scooped Olivia up, carrying her to the bed. He placed her onto the pillow-soft mattress and then settled over the top of her. She loved the feeling of his weight pressing firmly on her, dominating her. She moved her hands across his broad shoulders wanting to feel every inch of him and her foot hazily slid up and down his thigh while her nails traced the path of his spine. Her hands skimmed his waist and then she squeezed and pulled at his buttocks, urging him to move closer to her aching center.

As she explored his body, Fitz tenderly kneaded the soft flesh of her breast, thumbs flicking her nipples until they stood at attention only to replace his hands with his mouth, biting and suckling first one and then the other while Olivia whimpered in pleasure.

He moved up her neck while she moaned and raked her fingers through his hair. His breath was ragged against her ear and she shivered already close to the edge.

Fitz raised himself from his elbows, looking down at her, brushing an obsidian lock of hair from her face.

He whispered against her lips before sliding to lie beside her. Gently he trailed fingertips the length of her body, causing her to shiver with delight. Picking up her arm, he brushed delicate kisses down its length until he reached her hand. Then one by one he sucked each finger. His tongue teased the sensitive skin of her breast, all the while intense blue eyes deeply gazed into her deep brown ones.

He worshipped her toned flat tummy and moved down to her legs, trailing butterfly kisses up her calves, across her thighs and then back onto her stomach. His tongue licked the entire surface of her belly and traced the shape of her navel. Fitz gently bit at her waist and hip bones then soothed the skin with tender kisses. Finally, after having laid claim to almost every inch of her body he pushed her knees slightly apart and moved so he sat between her legs. He stared into her dark eyes, desire making them appear black.

"Open yourself to me." He whispered to his dark-skinned goddess.

Knowing what was to come, Olivia raised her knees slightly and spread her legs wide, flatting her back against the mattress so that her hips were tilted upward. Lying there totally exposed to her man she could feel the tremors already building inside of her, her juices flowing, preparing the way for his possession. The thought of what was to come had her hips moving restlessly, begging him to take what she offered.

Fitz slid his fingers over the sensitive flesh that dipped the first one then two fingers into her, causing Liv to clutch at the sheets. Rhythmically he moved his fingers in and out of her, while his thumb brushed against her swollen nub. With each stroke, her breath hitched, and she struggled to hang on. When his hot tongue began to tease her tender flesh, she knew she was lost and tumbled over the edge.

Her heart hammered in her chest and she tried to catch her breath, but Fitz wasn't about to let her rest yet. Rising to his knees, he gripped her hips.

Slowly he thrust himself into her, relishing in the incredible sensation of her tight wet folds. Liv whimpered at the sensation of being completely filled by her lover as he began to rock against her, the tension immediate began to build.

Fitz relished in the beauty of her dark shapely body intertwined with his pale muscular form.

Both were beyond control, they desperately sought release.

Words failed her and she was unable to speak.

She wanted more, needed more, she could feel it building inside of her, inside of him.

Liv cried out as she came, her body clamping down, around his. At the same time, Fitz gave a guttural cry and emptied himself inside of her as he tries to find the strength to move. He begins to roll over and she stops him.

"No don't." She managed to say while wrapping her arms around his sweat-soaked body.

So Fitz relaxed, burring his face in Liv's hair as she leisurely rubbed her hands up and down his back.

He was still inside of her and she wished they could stay like that forever. She felt so possessed by him, she never wanted them to be apart.

After a few moments, Fitz withdrew himself and collapsed hard beside her. Only a second passed before he rolled over and scooped her up into his arm, drawing her petite body close to his chest.

"I'm always away from you, and I hate that." He said letting out a deep sigh of regret. "Our life is under constant scrutiny, the reporters and their innuendos ...fuck...sometimes I want to just give it all up and run away with you..."

"I'd be lying if I said it was easy being married to the President of the United States." She let out a small giggle. "But I wouldn't trade it for anything in the world."

Running her fingers through his curly unruly ringlets she whispered. "I'm here Fitz, and I'm not going anywhere."

She knew her words settled him and she feathered kisses along his jaw and side of his neck. When she opened her eyes to look back at him, she noticed he had a mischievous twinkle in his baby-blues and she knew if she kept going round two would begin soon.

Rising slowly from the bed, with a little extra sway in her hips, Olivia walked to the bathroom. After a second the bathroom door swung open and her head popped out.

"You know, I could use a shower. Care to join me?"