Domestic by AntiVenom
[Reviews - 124]
Table of Contents [Report This]

I don't know if there is such a thing as selective writer's block but I think that I have it. I can write this all day long but when I start in on my series All that matters the cursor just blinks on the screen. I don't know why that happenes. Maybe posting this will help me with the other stories? I don't know but here it goes...self medicating 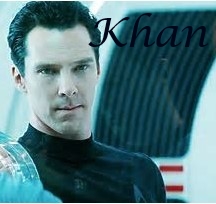 He wasn’t anyone’s choice for a companion. His crippled psyche made him ruthless not better. However, to one man he was perfect…a perfect weapon to try and control with a woman.

Khan stared at his companion from the other side of the table with anger and lust in his body. She thought that this meager offering of apology would satisfy his displeasure. She could not understand why he just did not tell the computer what he wanted. He said he wanted food from her hands. He called it being domestic. She just thought that he wanted complete control over her. “You call this a meal.”

His deep voice rattled her insides and stoked her anger. She wanted to keep walking past their quarters here at the space station Prime but he would hunt her down of that she was positive. Starfleet kept the Enterprise docked here for three weeks now and Nyota knew it had something to do with Khan and his powerful friends. She looked up from her plate. “I had to work late.”

“You are docked here how much work could there be unless you were planning an escape…. from me.”

Nyota smiled at his words. Something sparked inside his body at her gesture of disobedience. He did not know why her desire to deny him made him want her even more than he should. He needed to dominate her and make her understand that he was one that she should try to placate.

Khan smirked. “Is your former teacher Commander Spock still trying to persuade you to run away with him. He does not approve of this union of ours.”

“Many don’t approve of this union of ours…including me. Commander Spock is not trying to persuade me into anything, that is only in your mind,”

Khan chuckled. “It is in his mind as well.”

Her dark eyes glared at him for a moment before she stood from the table and walked from the dining area in their suite and into the bedroom. She did not hear his footsteps behind her but she felt his arm circle her wrist and turn her around. Her back touched the wall behind her as Khan brought his body hard against hers. Nyota turned her face away as his lowered his persuasive lips towards hers.

“Please remind him that you are mine in every way and will stay mine…; in every way.” His deep voice filled her ear as his bone breaking hands slowly moved down her body incased in the red Starfleet uniform.

“You belong to me and he knows that. He can smell me all over your soft body. Perhaps you have forgotten your constant begging me to stop and then not to stop. You were full of confusion yesterday.” He felt her trembling with anger and disgust that he had touched her and made her want him.

She felt his chest rumbling. “Maybe a repeat of yesterday is needed to refresh your memory.”

“NO!” She meant to shout it out to herself more than to him. He never listened to her. She did not know when he started stalking her at the academy but she knew that he had powerful friends in Starfleet. These friends gave him what he wanted and what he wanted Nyota Uhura. He wanted her from the first moment that he set eyes on the young woman walking through the doors her very first day at the academy. General Marcus controlled her studies unseen by the others senior members of Starfleet. He kept her within Khan’s eyesight. He allowed his weapon private time with her. Even though the young cadet at the time did not find the man appealing Khan would not take no for her final answer. A staged violation against Federation policies charged to Nyota Uhura and Khan her only witness to kept her in the Starfleet program guaranteed that she would agree to his demands. Marcus saw nothing wrong with using her as bait to keep his weapon Khan Noonien Singh sated for now. He would eventually try to use this bait against him but Khan knew the mind of this corrupt man and laughed at the thought that this man would think that this female meant anything to him or would that she would ever mean anything to him.

He began slowly pulling her from the wall and towards their bed. Nyota looked up at him as he smirked at her. “It will not hurt that much this time. Had you not lied to me about your experience all that pain would have been averted. I will go even slower than yesterday.”

She tried to pull her arm away but Khan pulled her into his body. His eyes that usually had a combination of blue, gold and green running through them had turned black. Nyota stared mesmerized watching the darkness roll over the irises. Khan lowered his lips to her and let his kiss do what he intended. Her body began to soften in his arms. He was planning on showing her that their honeymoon would last longer than one day.

Carol Marcus stared at all the black monitors facing her and slammed her hands on the desk. He had found all the cameras and destroyed them. He would of course think that her father had put them there but they were her idea. She wanted to see what made this superior man think that he was better then everyone. She thought that it was a mistake for her father to put an outsider into their plan. Lieutenant Nyota Uhura was not safe. She was a part of the Enterprise and they were not to be trusted.

Why her father gave in to Khan’s demands Carol would never understand. She was more than willing to become Khan’s mate but he wanted nothing to do with her. He was fixated on the dark skinned communications officer. She would just have to show Khan the error of his thinking. Her father did not understand how much easier it would be for them to control Khan if she were with him. She knew that she could make the man love her. He only loved his crew that he had placed in the cryotubes to save their lives.

Her father had woken this man to help them defeat the Klingons that were threatening the worlds according to her father. Starfleet did not agree with him. General Marcus wanted to show them that he was right and he would start a war if he had too.

Carol did not care about any of that. All she wanted was this man that she could not even touch because he would not let her. He found her lacking so he said to her when she stole a moment to speak with him. She would show him and her father that she was exactly what he needed.

Carol turned off the monitors and walked from the room and into her father’s office. She knew that Nyota Singh was in her quarters with her mate allowing him to touch her. The woman had no idea the power that she wielded and she never would because she hated her husband. If Carol could speak with her she was positive that she could draw her away from Khan and force her father to accept her proposition of being Khan’s mate. Although her father would consider it Khan would not. He would hunt Nyota down and then kill whoever brought this plan about. She could not remove the woman from Khan’s presence right now but she knew her chance would come. She just had to be patience. Khan was not a man who remain loyal to Nyota. He said that he was better at everything. Carol wanted to show him that she was better also.

Marcus looked up from his tablet and stared at his daughter. “You still do not agree with my decision to give him what he wanted.”

Carol frowned. “She will suspect something.”

Marcus smiled. “Carol if you knew him as I do then you would see that my decision was the correct one. I had never seen him so focused on one thing. If I had not given her to him he would have taken her and then we would have been exposed. We can control him with her.”

Carol shook her head. ‘He is not a man that can love anything but his crew.”

General Marcus stared down at the picture on his tablet. “There was one of his crew that was apart from the others. He was an outcast. If Khan will not do as we want, then I will wake him and he will take his place.”

Carol shook her head. “You should have done as I had asked. She cannot be trusted to go along with your desires. He will not bend to her. He does not bend to anyone.”

Marcus watched his angry daughter walk out of his office. She knew nothing about Khan. He could not have this psychopath around his daughter. Nyota Uhura was easy to sacrifice for his plans. Marcus knew that if Khan would bend for one thing it would be her… his obsession.

I thank you for looking at the pictures ( First time doing it on this site) and or reading the chapter.