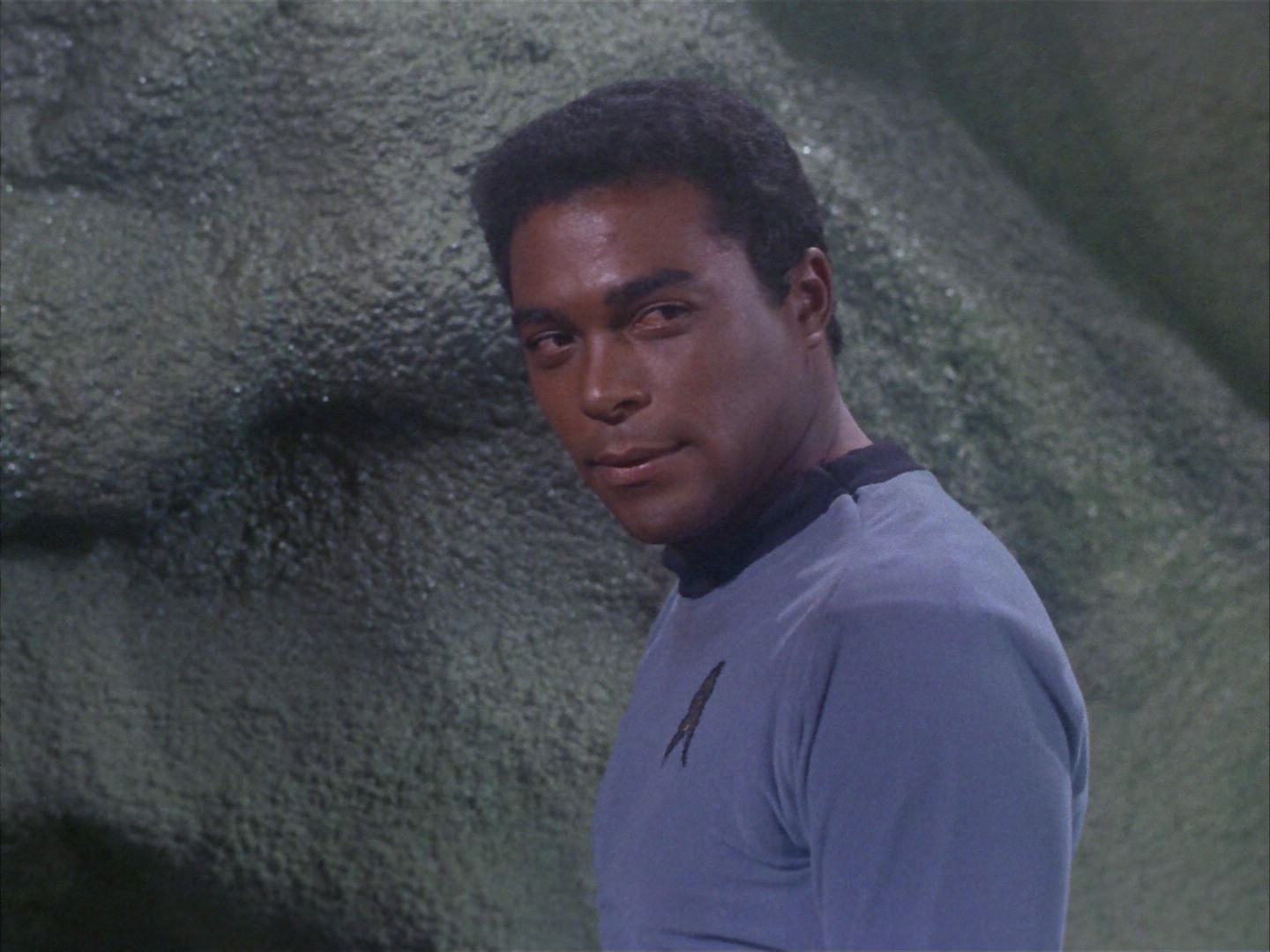 Lieutenant Samuel Boma, an astrophysicist and, at one point, one of the smartest people in Starfleet Academy, had graduated with high honors in his major. His publications on his theories were legendary and were sought after across the galaxy. Even on Memory Alpha, his works were considered among the best. Boma's work was admired by the top scholars in his field; they would seek him out for advice, and they respected his expertise. There were no questions about his ability to contribute to the field of space and time.

His looks were outstanding: he was handsome, confident, and often the object of desire of female crew members. Boma bathed in their worship, drank it like fine wine. He could have it all and do it all. He worked well with others, interacting with all who admired him, and he was a savvy poker player. He was physically handsome; he kept his body well toned and fit, ready to entertain the ladies when they were willing. His dark curly hair, rich dark eyes, and smooth brown skin were a magnet for women. Then there was his soulful voice; it was so smooth that hearing him sing an old love song like "If You Were Mine," could curl a woman's toes and make her hang on his every word. Boma had it all; he was gifted in so many ways.

Yet he was held captive-not by chains or the brig or any other confinement-but by his heart. His heart would melt upon hearing her name. His mind would go into overdrive; he would lose all sense of reason when he looked into those deep brown, sensuous eyes of hers. Petty Officer Rakesh Patel, the Enterprise's resident bookie, had an open line available with ten-to-one odds for any crewman even getting a date with Nyota Uhura, much less getting a kiss from her or sleeping with her. The male crew would be relentless in teasing Boma about his failure to hook up with Uhura when they learned of it.

"Says the man who always told us that she was off limits."

"Says the man who browbeat us just for looking at her."

"Says the man who would physically beat us down for asking her out."

He had made it clear that any man who conversed with her, or even looked at her, would face his wrath.

What made matters worse was that Ensign Matthew Henry had dared to ask her out, and she had accepted! Boma compared Matt with himself. After the humiliation of finding out about their date, Boma looked into the mirror to see if he had a pimple or dirt on his face. Boma was taller and bigger around the shoulders; he had a larger chest than Henry, but Nyota had accepted Henry's invitation anyway. "What does he have that I don't have more of?," Boma wondered. Then he had to face down the stares and laughter, as well as snide comments about how the little guy with no muscles had gotten a date with Miss Wonderful. Even alone in his quarters, he was not free of the teasing; he could hear the comments in his head:

"Only you can look at her-right, Boma?"

"She was holding out for you, Boma!"

"Yeah, Boma. She had eyes only for you, dude, because you're the man!"

"You said she was off-limits to whom? Everybody but you?!"

"I guess Matt Henry showed you!"

"Not any closer to Uhura today than yesterday?"

Boma had thought that was bad, but it was so much worse when he found out about Uhura and Mr. Spock:

"Homeboy came out of nowhere and stole your woman!"

"I never saw Mr. Spock rap with her, but there they go, walking hand in hand!"

"I never saw Mr. Spock make a move on any woman, but here he is, married to Lieutenant Uhura!"

"You had us for a moment when you said you would take on any guy who asked her out! Are you going to fight Mr. Spock?" The last was followed by general snickering. Everyone on the ship knew the Vulcan was three times as strong as any human and quite skilled in hand-to-hand combat.

"Mr. Spock! I hated that man even before I knew about him and Uhura!"

The Vulcan had been a star at the Academy and had become a legend throughout Starfleet, serving on the Enterprise under Captain Pike and now Captain Kirk. Mr. Spock had led scientific expeditions, had conducted and directed cutting-edge research, and was a decorated officer many times over. His name was known throughout the galaxy and was routinely mentioned along with Isaac Newton, Albert Einstein, and Zefram Cochrane (inventor of the warp drive).

Despite Boma's brilliance, Mr. Spock had outshone him in every way. Boma had been jealous of him even before he discovered his relationship with Uhura. Their time together on the Galileo had been heated with Boma's raw emotions. Mr. Spock, of course, kept his own emotions under tight control.

Boma had challenged Spock's humanity, his authority, and his dignity. In Boma's mind, Mr. Spock was just a machine who had no love to give.

"Who would want him?" Boma wondered. "He lacks character; he had no empathy when Gaetano and Latimer died."

Boma's jealousy of Spock was so intense that he had bullied the Commander-his superior-during the Galileo incident.

He had embarrassed himself then, and he was now being humiliated by the crew for his past behavior in regard to Uhura. Could he ever live down the shame?

The crew reminded him of his pledge that she would belong to him.

They reminded him that he had considered her untouchable-to everyone except himself.

They reminded him of his anger and threats toward any man who spoke of having an interest in her.

They reminded him that Uhura was no longer his, but now belonged to Mr. Spock.

After his dressing down by Kirk, Boma had to learn to live without a chance at Uhura, as well as having to face the wrath of his peers daily. It wasn't just the male crew members who had it out for him; the female crew members had not appreciated his obvious interest in Uhura and disregard of them either and were just as likely as the men to launch a verbal assault at him. His massive ego-his pride as an eligible, sought-after male-had taken a huge blow. It was as if Uhura (and Spock) had put a stake through his heart. The open wound lasted for weeks; Boma couldn't admit that Uhura was truly gone. Forever!

His outsized pride had come before the hardest of falls, and the wounds he suffered were invisible, but deep. He had lost his way while pursuing the most sensuous woman on the ship.

She was the one thing he couldn't have. He had had many women, but Uhura had a special place in his heart-a place that was now empty. All his charm, intelligence, and physical attributes hadn't attracted her. His mojo had failed; it was a shock to him. He lay on his bed in the dark wondering how it had happened.

Commander Spock had been an unknown variable in Boma's plan that should have resulted in him ending up with Uhura.

The realization bombarded him-his imagined life with Uhura was gone!

The male crew taunted him to no end. They wouldn't let him forget the one that got away.

Boma's feelings were so complex he couldn't think straight:

"Was it a dream?" he wondered.

"Did it really happen?

He was the laughingstock of his peers.

Pride. Pride was the only thing that was left for Boma. But he had to finally face the fact that it was his pride that had led him to his current situation. And he had to face that fact alone.

Boma finally admitted to himself that his situation was the result of his own shortcomings. He could transfer to avoid the endless taunts about his previous swaggering and intimidation of the other male crew members. But the Enterprise was the best ship in the fleet.

"Why run?" he wondered. "I WILL overcome this.

"I can deal with her rejection, even though it's the deepest wound my heart and pride have ever sustained.

"I can come back from this.

"I can focus on other things, other parts of myself. Not dwell on the pain. I can move forward and do something positive with my life, my career. That is how I can heal these wounds to my heart and my pride.

But despite his self-affirmations, he wondered if his heart and his pride could ever let go of Nyota Uhura.

The Battle for Spock part 3: Chapter 16